UPDATE ON THE FOOT AND MOUTH DISEASE OUTBREAK IN LIMPOPO

UPDATE ON THE FOOT AND MOUTH DISEASE OUTBREAK IN LIMPOPO

The Department of Agriculture, Land Reform and Rural Development, has this month identified additional premises as positive for Foot and Mouth Disease (FMD). This brings the total number of confirmed positive locations since the start of outbreak to sixteen (16), with all positive cases inside Limpopo Province.

The Department wishes to emphasize that the new cases found do not mean that the outbreak is actively spreading. It is an indication that the disease control efforts are effective in identifying positive locations, which became infected after the initial spread of the disease from specific auctions in September and October 2019.

Most of the positive locations were found as a result of the continued trace-forward and trace-back investigations of the FMD outbreak. This means that all premises with links to known positive locations and specific auctions are followed up and tested. More than 130 points were identified and precautionary quarantine has been lifted on 57 properties that have been proven negative for FMD after clinical examination and testing.

All properties where the disease has been confirmed have been placed under quarantine and movement restrictions are in place. Procedures have been finalized for animals on FMD quarantined properties to undergo early slaughter at designated abattoirs with specific conditions to prevent the spread of FMD. One abattoir has been designated so far and three affected feedlots have been approved to proceed with early slaughter of animals, provided that the animals are not showing active signs of the disease. FMD does not affect people, therefore, meat and milk from infected livestock are safe for human consumption, however, the movement of these products must be controlled, as it can still spread the disease to other cloven-hoofed livestock.

The Department, together with the Provincial Veterinary Services has been conducting awareness on FMD clinical signs and biosecurity measures in Limpopo Province from early December and this initiative is continuing in the new year. Awareness was already conducted in 14 villages in the Molemole area and also during two farmers’ days.

The Department still encourages all livestock owners to maintain strict biosecurity on their farms. Any clinical signs of FMD should be reported to the nearest State Veterinary Office or the nearest veterinarian for further investigation. Clients are further advised to still limit the movement of cloven-hoofed animals onto their farms. If movements are necessary, the buyers are advised to insist on health declarations, issued by the sellers’ private veterinarians, attesting to the health status of the animals and the farm of origin.

The prohibition on the gathering of cloven-hoofed animals from two or more properties, for distribution to two or more properties, remains in place in the whole country. This notice does not prohibit the movement of livestock from farm to farm, or private auctions at individual farms. The gazetted notice is available on the DAFF website https://www.daff.gov.za/daffweb3/Home/Foot-and-mouth. This prohibition will be reassessed by the Department once the extent of the outbreak had been satisfactorily determined through the ongoing epidemiological investigation.

The map hereunder indicates the locations of the positive cases, which occurred within a roughly 100km x 100km area in Limpopo from south of Polokwane to north of Makhado (Louis Trichardt on the map). 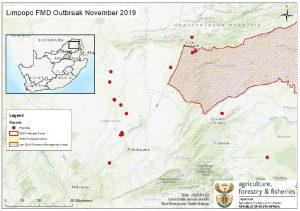